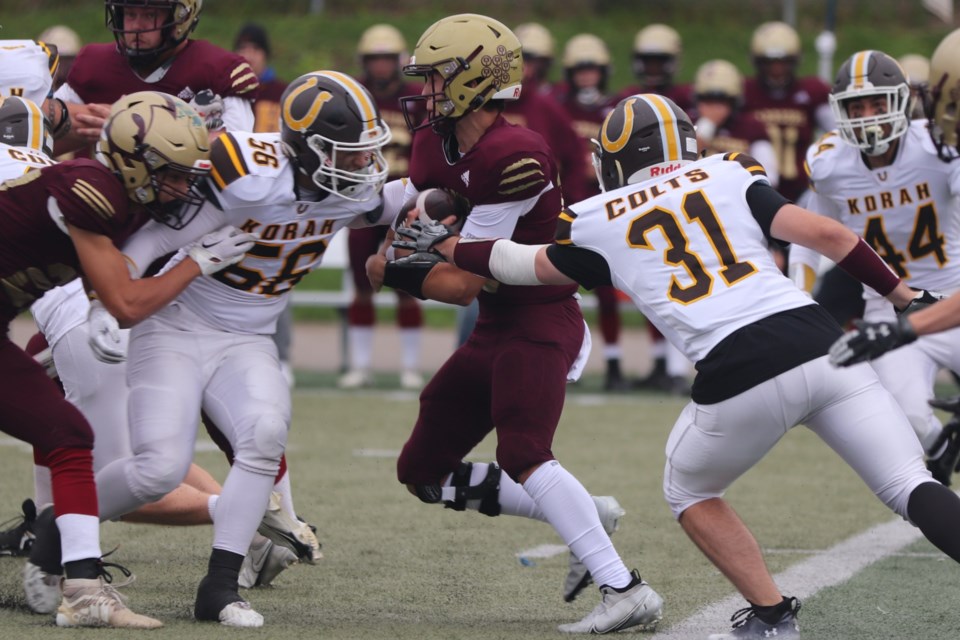 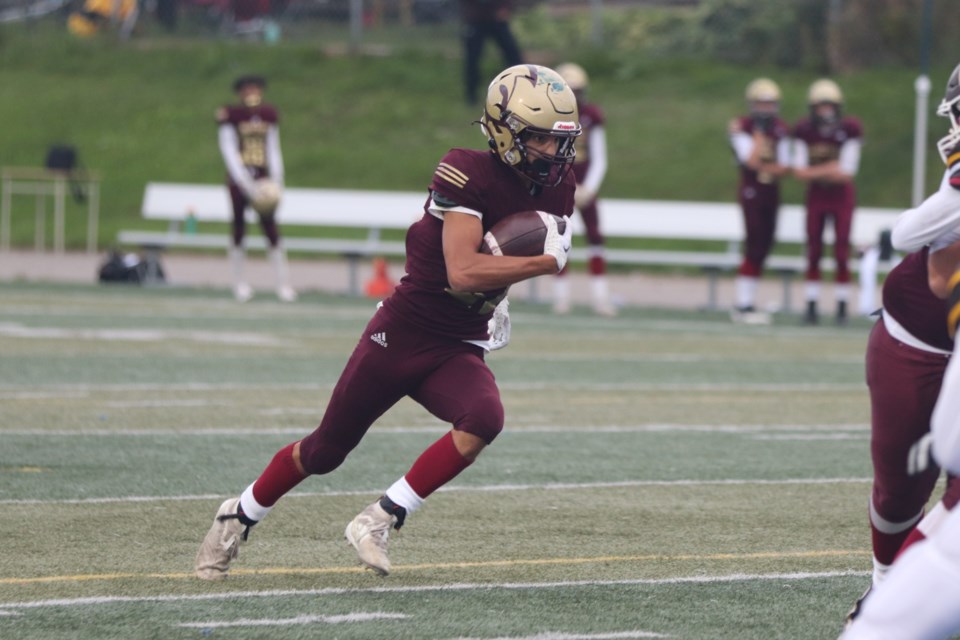 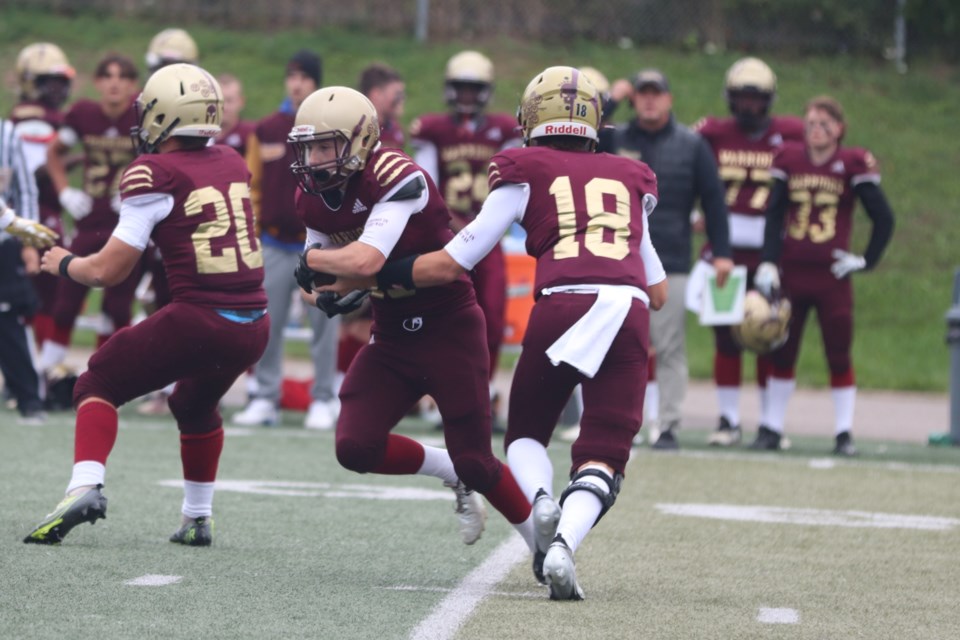 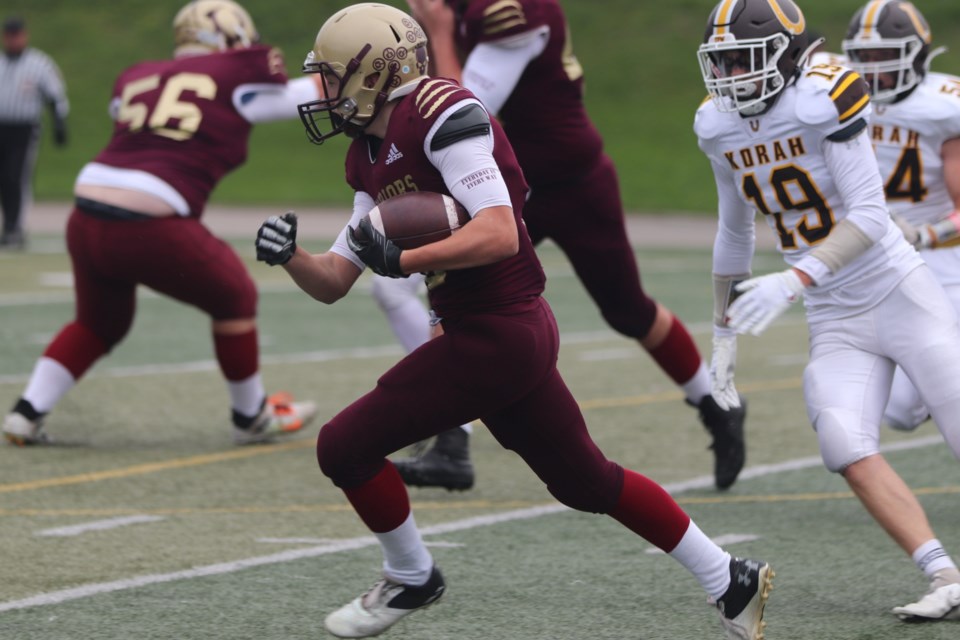 For the second straight week Andrew Lowry managed to block a field goal.

But Lowry’s latest block, in the final minute of Saturday’s road contest, proved to be much more significant for the veteran member of the Huron Heights Warriors’ senior football squad.

That’s because Lowry, a towering 6-foot-8, 285-pounder who plays both offensive guard and defensive tackle, played a key role as the Warriors eked out a 14-13 victory over the host Korah Colts in Sault Ste. Marie.

It appeared the Colts just might pull off an upset in the final moments of Saturday’s tilt. Trailing 14-12 the Korah squad lined up for what it hoped would be a game-winning 25-yard field goal.

“Obviously a lot was on the line and I was pretty concerned,” Lowry admitted. “In my head all I was thinking was to try and block the kick.”

And that’s exactly what he did.

“It hit off my right hand,” Lowry added of the Colts’ field goal attempt from kicker Ty Koski. “It was enough to tip it off.”

In the ensuing scramble the ball ended up in the Warriors’ end zone. Huron Heights’ member Alex Figan was the one who jumped on the ball, resulting in a single point for the Colts and preserving the victory for the Warriors with about 25 seconds remaining on the game clock.

Weir added his charges on the field knew exactly what their roles were during the final pivotal point of the match.

With the victory, the Warriors officially boosted their 2022 record to 3-0. Huron Heights also registered a ‘win’ in a scrimmage earlier this season.

The Huron Heights side hit the field to square off against the Colts following an eight-hour bus ride earlier in the day.

“Going up wasn’t too bad,” Lowry said. “It was actually pretty fun. We were watching movies.”

Lowry added the Warriors arrived about two hours prior to kickoff, ample time for team members to get a walk in as well as a proper warmup beforehand.

Weir was pleased his club was able to continue its winning ways. And even more so considering the Warriors were forced to play the contest without three key regulars, who were nursing injuries.

Team captain Brandon Quigley, who stars at the running back and linebacker positions, has been unavailable for duty since being injured in the team’s season opener earlier this month. He is close to returning to action.

The Warriors also played Saturday’s outing without left tackle Lucas Holden and Griffin Pozzebon, the team’s starting cornerback who also plays offensively as a running back.

“Korah was firing on all cylinders and as far as I could tell they had all their top players,” he said. “When our kids are pulling out these wins with the guys we’re missing you say ‘Wow’”.

The Warriors are scheduled to return to Sault Ste. Marie next Saturday for their next match, an afternoon contest against the St. Mary’s College Knights.

Meanwhile, the Warriors’ junior team will be looking to improve upon its 3-0 start this coming Saturday. It will host St. Paul High School from Ottawa in a 2 p.m. game.