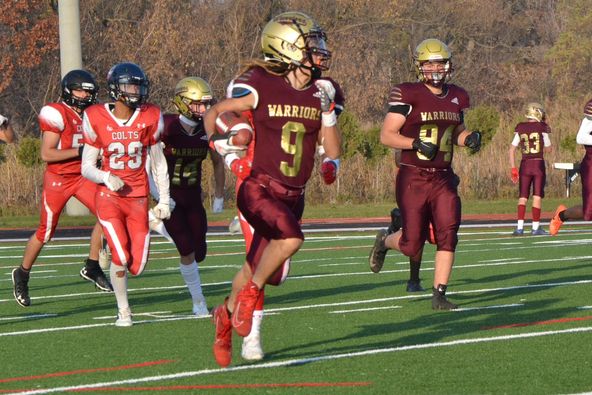 The Huron Heights Warriors junior football squad will enter its season-ending tournament on an upbeat note.

The Warriors travelled to Markham on Thursday and registered a 33-30 victory over the host Bill Crothers Colts.

With the win, the Huron Heights squad improved its 2022 record to 7-1. More importantly, however, the victory allowed the Warriors to avenge their lone loss of the season thus far.

The Colts had eked out a 9-7 win over Huron Heights a few weeks ago.

The Huron Heights club is now gearing up for the Junior Metro Bowl competition. Exact dates of games have yet to be confirmed.

St. Michael’s College in Toronto traditionally organizes the invitational tournament featuring many of the top high school junior programs in the province.

Tournament officials had announced the opening-round matchups for an eight-team event on Wednesday.

But Warriors’ coach John Stathopulos said he was told a day later that his side would have to participate in a play-in game, in all likelihood this coming week, against a Brantford team.

Stathopulos said he doesn’t mind having to take part in a play-in match as the Warriors would have had a bye week, since some of the Junior Metro Bowl participants are still competing in their own league playoffs this coming week.

The Warriors certainly received a stiff challenge from the Colts in their rematch on Thursday.

“It was a tight one,” Stathopulos said.

The Colts hit the scoreboard early on taking a 6-0 lead.

“And then our offence responded with a long rushing drive and touchdown of our own,” Stathopulos said.

The Colts then took a 12-6 lead but that was short-lived as Huron Heights marched down the field again, scored a major and hit its convert to enjoy a 13-12 advantage.

Huron Heights then extended its lead to 33-20 when Caleb St. Clair returned Bill Crothers’ second-half kickoff all the way into the Colts’ endzone.

“It was more of a defensive battle after that,” Stathopulos said.

St. Clair continued his red-hot play of late for the Warriors. The Huron Heights running back scored four touchdowns in the contest.

Three of St. Clair’s TDs were via rushing plays. He also scored his fourth major via the aforementioned kickoff return.

Luke Mercuri scored the Warriors’ other touchdown. Meanwhile, Ben Ironi was credited with a pair of points when he ran in a two-point convert.

And Marco Liegghio scored a point when he connected on an extra point convert.