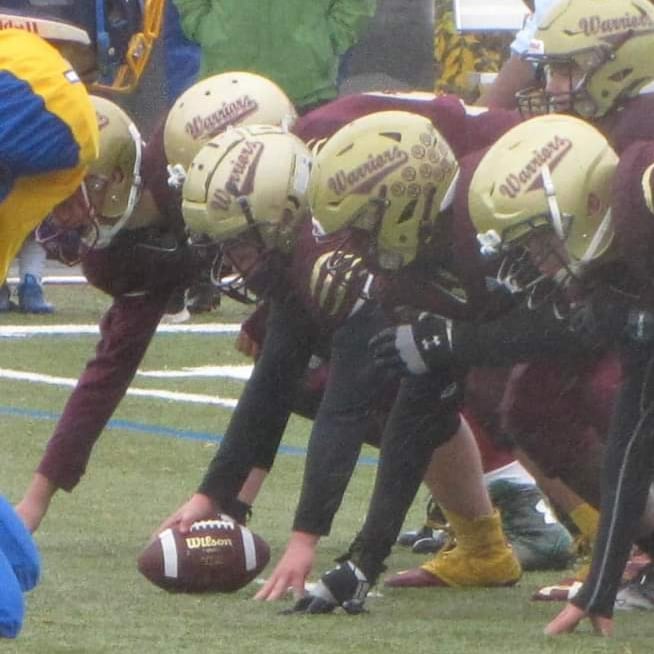 JUNIOR WARRIORS BOUNCE BACK FROM LONE LOSS WITH LOPSIDED TRIUMPH

The Huron Heights Warriors junior football club was able to get back into the win column in convincing fashion.

The Warriors hit the road this past Thursday and squared off against the Brantford Mustangs in a match held at Kiwanis Field.

With that win, the junior Warriors are now sporting an impressive 5-1 mark this season.

The match against the Mustangs was the first game action for the Huron Heights side since suffering a heartbreaking 9-7 setback against Markham’s Bill Crothers Colts the previous week.

John Stathopulos, who shares the Warriors’ head coaching duties with Paul Placko, was rather confident his side would manage to post a W against the Mustangs.

“We had scouted them and I had a feeling they wouldn’t be as strong as Crothers,” he said. “It was a good rebound game for us.”

Stathopulos had plenty of praise for the Warriors’ defensive and offensive units.

“Our defence really came out to play,” he said.

The Huron Heights bench boss added the club’s offence was especially impressive with its outside runs – the way the Warriors scored all of their rushing TDs.

Caleb St. Clair had a rather impressive outing for the Huron Heights squad as he scored four touchdowns.

The junior Warriors next game will be this coming Saturday when they travel to the nation’s capital. Huron Heights will battle Ottawa’s St. Paul High School.

The Warriors already have a pretty good idea what to expect from the St. Paul team. That’s because they squared off against the same St. Paul club earlier this month.

Huron Heights pulled off a 28-6 win in that contest.

“They’re pretty balanced with the run and the pass,” Stathopulos said of the St. Paul squad. “I think they only have about 22 players but they’re all strong players.”