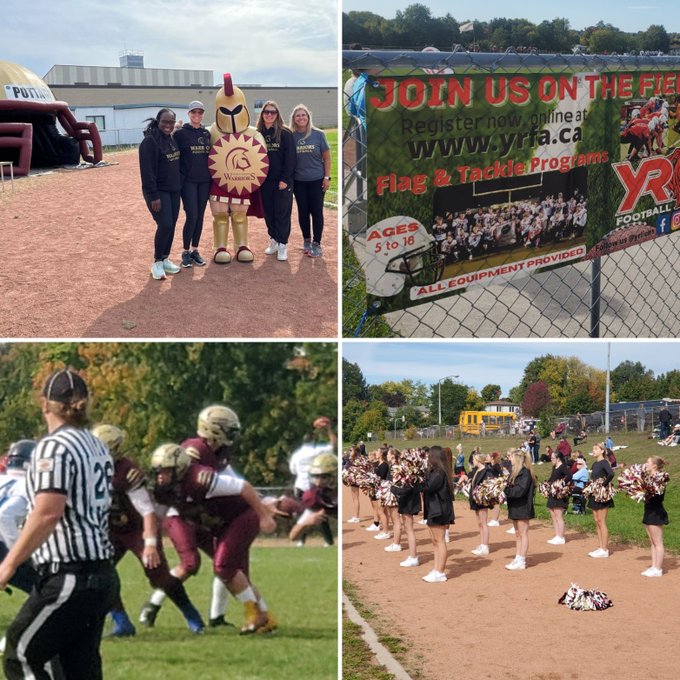 The Huron Heights junior Warriors were caught a bit off guard by their opponents’ strategies on Saturday.

But it didn’t matter in the end as the Warriors took care of business once again, downing Ottawa’s St. Paul High School 28-6.

With that victory the Warriors are now sporting a perfect 4-0 record this season.

“Our defence really stepped up,” said Jonathan Stathopulos, who shares the Warriors’ head coaching duties with Paul Placko. “I think St. Paul only had one or two first downs in the first half.”

Stathopulos said the Warriors had limited game footage on the Ottawa squad from some action earlier this year.

“It was all passing and not much rushing,” Stathopulos said of the film that was made available to the Huron Heights side.

In Saturday’s encounter, however, the St. Paul squad started off trying to run the ball. When that didn’t provide much success, the club tried out its passing game. The Huron Heights team was also able to thwart those efforts.

Meanwhile, the Warriors were piling up their own points. In fact, the Huron Heights squad scored all of its points in the match during the first two quarters and led 28-0 at halftime.

Running back Caleb St. Clair also had a pair of majors. For starters, he scampered in for a TD on about a five-yard run to open the scoring.

St. Clair also had an impressive TD as he caught a St. Paul punt and ran it all the way back, about 65 yards, into the end zone.

Marco Liegghio connected on three of his four point after attempts. Liegghio was also credited with another single point after booting a kickoff into the St. Paul end zone.

Liegghio, a Grade 10 student who also plays defensive end for the Warriors, said his teammates were rather fired up heading into Saturday’s outing.

“We were really pumped up to be out there playing again,” he said.

The Huron Heights club had an unexpected bye the week before. The Warriors had been scheduled to play Toronto’s Chaminade College Gryphons. But the Gryphons forfeited the contest, resulting in a 1-0 Warriors’ win, a couple of days beforehand.

Liegghio is confident the Huron Heights team can continue its winning ways.

“That’s the plan,” Liegghio said. “We’re going to keep on grinding and take it game by game.”

The Warriors’ next game is scheduled for Tuesday Oct. 11 against St. Andrew’s College from Aurora. The opening kickoff is set for 4 p.m.

That match was originally set for this Thursday. But Stathopulos said the contest was postponed as officials were not available for the game.