THE WARRIORS BESTED BY A ROUGE! 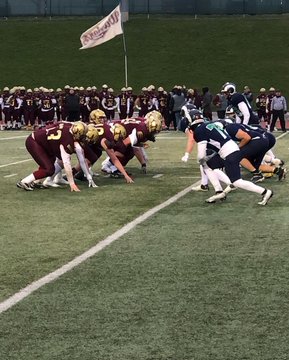 Talk about a heartbreaking loss.

The Huron Heights Warriors senior football team was hoping to conclude an undefeated season on Tuesday.

But the Warriors were edged 13-12 by London’s Laurier Rams in the Western Bowl held at the University of Guelph’s Alumni Stadium.

The Rams scored a rouge (single point) to win the contest on the last play of the match, after punting the ball into the Warriors’ end zone. The Huron Heights squad would have forced overtime if it had managed to get the ball out of its own zone but its returner was tackled by the Rams inches shy of his desired destination.

The Western Bowl was one of nine season-ending OFSAA Bowl games that were staged in Guelph this week.

The Warriors ended up with an impressive 11-1 record during their 2022 campaign.

“It was an amazing season,” Weir said. “We ran the gamut – Number 1 all year long. They did everything they had to do. It came down to the bowl game and we lost by a point. I guess if you’re going to lose, that’s the way to do it – don’t lose by more than one point, and on the last play of the game.”

Weir acknowledged it was without doubt a crazy way to end the championship tilt.

“That isn’t something that you really prep for at the end of a bowl game that you’re going to have to kick it out,” he said. “And we told them if you can’t get it out, kick it out. And the young man who did it did a great effort to get it out of the end zone.

Warriors’ quarterback Ethan Schwarz expressed a sentiment that no doubt all of his teammates were feeling.

“That’s a tough way to lose a game, especially with the season we’ve had,” he said.

Schwarz was doing his best to remain upbeat afterwards.

“We had a good year,” he said. “We had a great year actually. It’s definitely a sad way to end it though.”