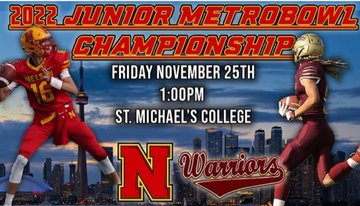 The Huron Heights Warriors have punched their ticket to the Junior Metro Bowl championship final.

The Newmarket-based Warriors advanced to the final of the eight-team invitational tournament with a convincing 41-14 victory over Niagara Falls’ A.N. Myer Marauders in the semi-final tilt held Tuesday afternoon in Toronto.

Huron Heights will now square off against Burlington’s Nelson Lords in Friday’s championship contest, which will be held at the Eugene Melnyk Sports Field, located at St. Michael’s College.

The opening kickoff is scheduled for 1 p.m.

Nelson qualified for the final earlier on Tuesday with a dominating 68-7 triumph over the host St. Michael’s College Kerry Blues in its semi.

Darcy Winsor was one of the key contributors to the Warriors’ semi-final W, scoring a pair of touchdowns, while playing defence.

For starters, Winsor managed to pounce on the ball in the Marauders’ end zone following a high botched snap midway through the second quarter.

Winsor scored his second major via a pick six. After intercepting an A.N. Myer pass, he scampered untouched about 20 yards into the Marauders’ end zone.

Winsor was surprised he was able to score a pair of TDs during the match.

“I wasn’t even expecting to get one on offence and I didn’t,” he said. “Defence was a lot better. Defence is my thing.”

Following their victory over the Marauders, the Warriors were presented with a trophy for being the Ontario Regional Junior Football Championship South-East Conference champions.

“That one doesn’t count,” Winsor said. “That bowl means nothing to us. We’ve got to get the (Junior) Metro Bowl.”

The Warriors and Lords have already faced each other once this year. Huron Heights eked out a 13-12 win in the season opener for both squads back on Sept. 9.

“It’s going to be a really good game, close again like the last one,” he said. “It will be an amazing game.”

Winsor added the Warriors were well prepared to square off against the Marauders.

“Everything that they threw at us we saw on film,” he said. “Maybe a couple plays but they didn’t really work out that well. But yeah, we watched our film and did what we had to do.”

“We knew they had a really exciting offence (with) a lot of motion, a lot of quads, which we typically don’t see especially at this level,” he said. “Their quarterback was easily the best quarterback we’ve seen all year. He could make every throw and he’s very shifty in the pocket. So, it’s hard to not only contain him but cover the passes at the same time.”

The Warriors’ defence, however, responded admirably to the challenge.

St. Clair opened the scoring with a 10-yard TD run late in the opening quarter. He also scored via a one-yard run with 26 seconds remaining in the opening half.

St. Clair then picked up his third TD, with a 10-yard run early in the third quarter.

Luke Mercuri scored the Warriors’ other touchdown early in the second quarter.

Like Winsor, Stathopulos is anticipating the Lords will provide some formidable opposition in Friday’s championship final.

Stathopulos said his charges are somewhat bigger on the offensive and defensive lines.

“But at the same time with the skill that they have and how fast they get to the football, that really gets nullified with size because they really fly to the ball on defence,” Stathopulos added of the Lords. “We’re really going to have to block it up well. Defensively we’re going to have to control the middle, control the line. If we can do that, then we’re good.”