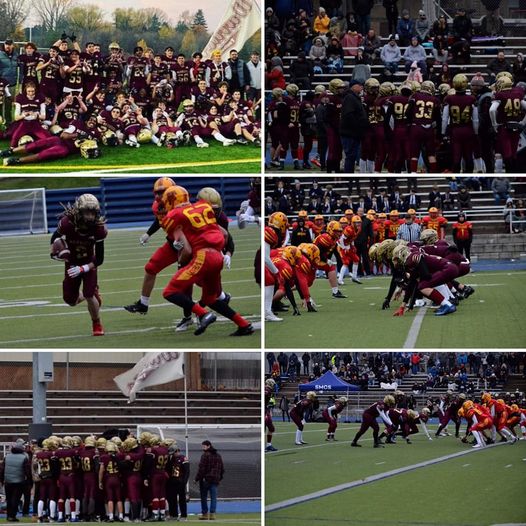 Football is indeed a game of inches.

Unfortunately, the Huron Heights Warriors found that out the hard way on Friday as they were edged 9-8 by Burlington’s Nelson Lords in the Junior Metro Bowl championship final staged in Toronto.

The Warriors had a couple of chances to pull ahead late in the contest, held at the Eugene Melnyk Sports Field at St. Michael’s College.

For starters, the Huron Heights squad thought it had scored what potentially could have been the game-winning touchdown when star running back Caleb St. Clair trotted into the Lords’ end zone on a 14-yard run with 83 seconds remaining on the game clock.

That Warriors’ celebration, however, was short-lived as the play was negated due to an unnecessary roughness penalty, which pushed the Huron Heights squad back 15 yards.

Then, in the final minute of action, Warriors’ captain Marco Liegghio lined up for a 38-yard field goal attempt. With his club trailing 9-7 at that time, a successful kick would have put the Huron Heights team up by one.

By Liegghio’s kick was inches wide of the upright and the Lords conceded a single point on the play to make the score 9-8 in their favour.

“Obviously it’s a tough one to swallow,” Liegghio said. “Losing by one point it really does suck.

I just feel we’re going to remember this feeling inside of us and come next year the Grade 9s are going to avenge us and they’re going to bring it back home for us. And us Grade 10s going up we’re going to a really good coach and he’s going to develop us and get us the attention we need to take it to the next level.”

St. Clair’s called-back TD wasn’t the only late play that infuriated the Warriors and their supporters.

There was also a bit of confusion during Liegghio’s field goal attempt. As he was lining up to kick, a Nelson player ran towards the sideline in an attempt to get off the field. The Lords’ player ran into the Warriors’ bench but then came back onto the field of play during Liegghio’s kick.

None of the game officials, however, threw a penalty flag.

“I was hearing that they had a guy too many and the refs were saying a guy too short,” Liegghio said. “There was just a lot of confusion. I was just mainly focussing on getting the kick through. And then it didn’t go as planned.”

Like his teammates, Warriors’ quarterback Lukas Mihelic was rather disappointed his side was not able to register a victory.

“We wanted to take it home for the team, for coaches and for history because we would be remembered in school as being the first junior team to do that,” he said.

Mihelic, who scored Huron Heights’ lone TD on a five-yard run, said a win on Friday would have been the ideal ending for his team. But he said it was still an outstanding season for his club.

“We’re just going to keep our heads high, hit the weight room and get ready for next season,” said Mihelic, who will be returning to the junior ranks in 2023 as he is a Grade 9 student. Liegghio had attempted just one other field goal this season, a 30-yarder which hit the upright and stayed out.

Mihelic said he thought Leigghio would connect on his late-minute kick.

“I thought he was going to be able to,” Mihelic said. “We should have just tried to take it up a bit more to get him closer maybe. But that’s not his fault because we put him in that situation. So that’s on me and the offence.”

Leigghio added there was no sense fretting over his missed opportunity.

“I knew I had the distance,” he said. “I’ve kicked it tons of times in practice. Even yesterday I was kicking from there consistently, from the 30-yard mark. It didn’t go and I have to move on.”

Both Leigghio and Mihelic said participating in a championship final was a nerve-wracking experience for the Warriors.

“The nerves were really high going into the game but come halfway through the first the nerves were kind of gone and that’s when we started to play Huron football,” Liegghio said. “Just like any football game there was adversity, there was ups and downs. I guess they just wanted it more and they got it.”

Mihelic also knew some of his teammates were apprehensive about the match.

Despite coming up a bit short of their ultimate goal, team members can still celebrate the fact they were part of the best junior squad Huron Heights has ever fielded.