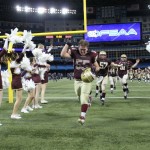 The Huron Heights Warriors High School football program is the gold standard in the York Region Athletic Association in many areas, ranging from its enthusiastic booster club’s backing and fund-raising efforts to a wildly successful on-field program with a rabid approach and plenty of trimmings.

But when your cheerleading squad out numbers your player roster, well, now you’re talking commitment at a whole new level. The warriors have 45 cheer squad members compared to 35 footballers. Forty-five! That almost doubles the entire roster for some YRAA high school football teams. 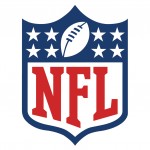 15 Canadafootballchat.com (CFC) reporters, along with “selected area scouts,” have been taking on the challenge of ranking the teams since 2009. As expected the rankings generate much discussion, and will likely motivate football fans in these communities to visit their local fields and catch some outstanding football.

The following are the top ten teams in the country, according to CFC, as at September 25, 2013

For the fourth season in a row CFC brings you the CFC TOP 50 HIGH SCHOOL NATIONAL RANKINGS powered by the Ontario Prospect Challenge (OPC). 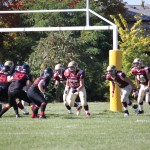 It’s no big secret to what the Huron Heights Warriors will do when they get possession of the football.

True to form, Scott counted the lone touchdown of the game when he ran 65 yards on an option play early in the third quarter to pace the Warriors to 9-0 victory over the King City Lions in York Region Athletic Association senior kickoff action Saturday night in Unionville. 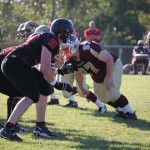 With reigning league MVP quarterback Kaleb Scott running the option as well as it has been run in these parts, the Warriors are the team to beat in York Region as the Warriors boast six returning starters on offence and defence from last season’s Metro Bowl championship squad… 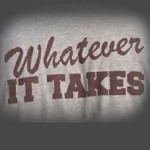 Huron Heights Warriors to do ‘Whatever it Takes’

Coming off an undefeated season the Huron Heights Warriors’ motto for this year is ‘Whatever it takes,” to keep their Metro Bowl title. 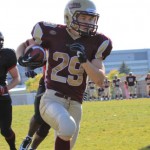 With school back in session, the high school football season is not far off.

It’s great to note the defending Metro Bowl champion Huron Heights Warriors are ranked 11th in the canadianfootballchat.com rankings and fourth among teams in Ontario, according to the online watchdog of Canadian football.

For whatever reason pre-season high school football polls are worth, give CFC credit for effort. However, it is disturbing no other YRAA teams crack the top 50 of CFC’s findings.

That isn’t to fault CFC in any way. It is, however, cause for concern for anyone looking toward a competitive season within YRAA senior ranks, where, if there is a challenger to the Warriors, it’ll be news. Truthfully, it would seem the Warriors program is light years ahead of anyone else entering this season, with no intention to look back.

It is not difficult to foresee a bunch of highly one-sided games on the horizon.

There are no events.