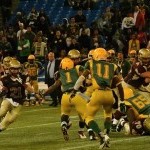 The 31st Metro Bowl is officially in the books, as last night the Don Bosco Eagles took on the Huron Heights Warriors at the Rogers Centre. 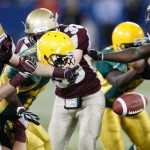 TORONTO – After a one-sided first half which saw Newmarket’s Huron Heights Warriors eclipse Rob Ford’s Don Bosco Eagles, the Warriors stifled a late comeback attempt to secure a 28-14 victory in Tuesday’s Metro Bowl at the Rogers Centre. Heading into the final, neither team had ever won the coveted Toronto championship before. For the Eagles, Tuesday’s game marked their first appearance in the Metro Bowl, but Huron Heights had been here before — twice.

Athlete of the Week: Kaleb Scott

Huron Heights Warriors’ quarterback Kaleb Scott, 17, has been playing football since the age of 6. He says it’s all about keeping a positive attitude and encouraging everyone on his team. 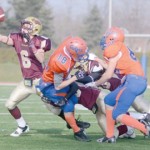 Huron Heights Warriors ghosts of the past will be crossing their fingers that three is the charm.The Newmarket school is, after all, making its third trip to the Metro Bowl championship game Tuesday night in Toronto after shredding the defending champion Donald Wilson (Whitby) Gators 40-3 in a semifinal game Wednesday in Etobicoke. 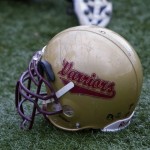 ETOBICOKE — There will be no Metro Bowl repeat for Whitby’s Donald A. Wilson Gators. In fact, it wasn’t even close. Playing in the senior football semifinal game Wednesday afternoon at Etobicoke Centennial Stadium, Newmarket’s Huron Heights Warriors overcame a 3-0 first-quarter deficit and stormed to an easy 40-3 victory over the defending Metro Bowl champions. 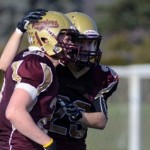 Donald A. Wilson knocked off by Huron Heights in Metro Bowl semifinal

ETOBICOKE — For the Donald A. Wilson Gators and Huron Heights Warriors, Wednesday’s Metro Bowl semifinal saw each team end up in an unfamiliar position.The result of that was the Warriors knocking off the defending Metro Bowl champion Gators quite convincingly in a 40-3 final at Etobicoke Centennial Stadium.

The strong seem to have a knack for getting even stronger.
Check out the Huron Heights Warriors high school football program, for instance.

The Newmarket school, a power in the YRAA in recent seasons, figures to have an equally bright future, judging by the popularity of the sixth Warriors Spring Skills Camp.

There are no events.