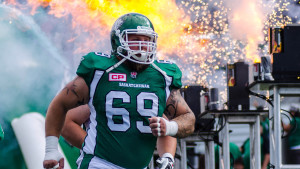 TORONTO — After signing Josh Bourke to a deal earlier in the day, the Toronto Argonauts have added another premier offensive lineman through free agency by signing former Saskatchewan Roughrider Corey Watman.

A regular starter on the Riders’ O-line, Watman is capable of playing multiple positions on the offensive front including centre. The 26-year-old is one of just a few impactful ratio-breakers at his position in this year’s free agent class and is among the top-ranked O-linemen outside of the veteran Josh Bourke.

“Corey is a local Toronto player from Newmarket’s Huron Heights Secondary School that played multiple positions in Saskatchewan,” said Argos GM Jim Barker. “He’s a young centre who we expect to come in and compete right away, and become a mainstay on our offensive line.” 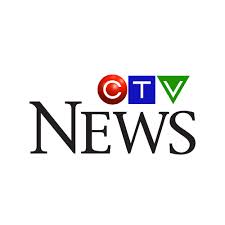 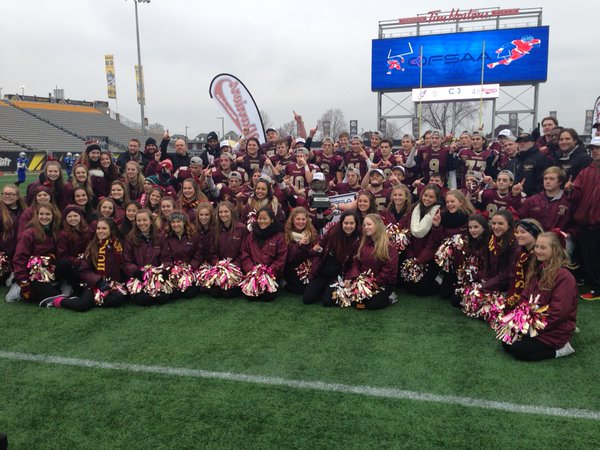 Sault Ste. Marie’s Superior Heights Steel Hawks discovered there is nothing fancy about the Warriors’ game other than its ability to crush all in its way. The Hawks absorbed a 48-0 drubbing at the hands of the powerful Newmarket school in the Simcoe Bowl played Tuesday at Tim Hortons Field in Hamilton. Quarterback Colin Grant ran the Warriors’ option-oriented offence to perfection, scoring three touchdowns on short runs and passing for two more as the Warriors hammered out an impressive victory over the Northern Ontario champions.

“Our guys came out rolling and kept rolling,” said Warriors head coach Al Rover. “We were definitely more prepared for them than they were for us.
Rover doled out special praise to defensive coordinator Josh Scott, whose unit controlled the Steel Hawks all day. “He really had them figured out,” said Rover.

Grant ran for touchdown scores of two yards and one yard in the first quarter and connected with Mike Strumos on a 40-yard pass-and-run in the second as Huron Heights rolled to a 21-0 lead by halftime. It was well beyond game-over by that point.

Grant, on a seven-yard-run, Gregg Anderson, Skyler McMurtry and Zach Needler on a 13-yard pass reception, had the other touchdowns for the Warriors. 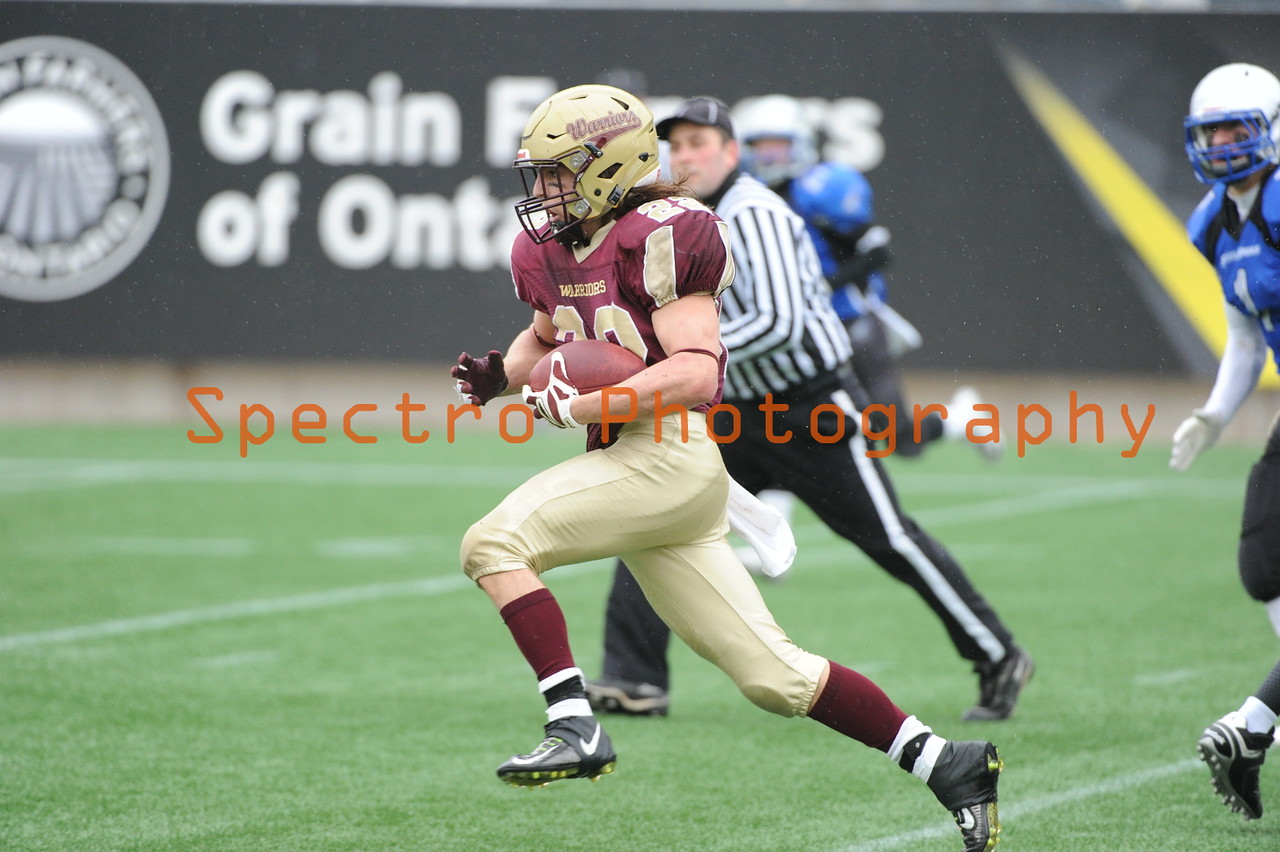 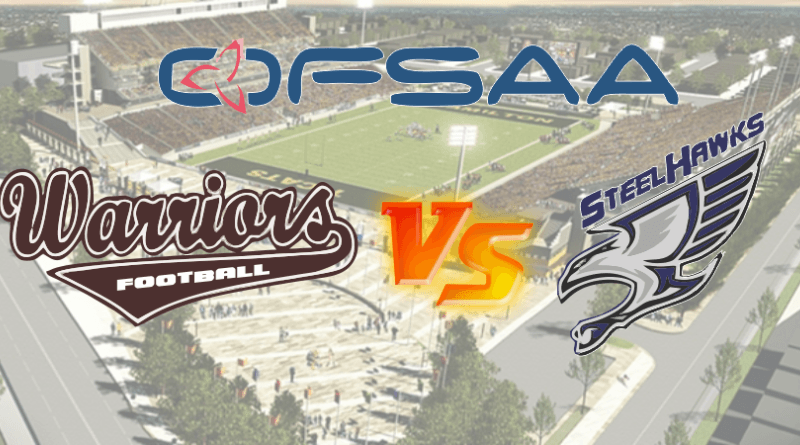 If was a tough finish to an otherwise smooth season for the Superior Heights senior football team at the Simcoe Bowl in Hamilton.

The Steelhawks dropped a 48-0 decision to the Huron Heights Warriors of Newmarket on Tuesday.

Colin Grant ran for three touchdowns on runs of two, one and seven yards and finished the day with 154 yards on 21 carries for Huron Heights.

Skylar McMurty added 90 yards rushing and a touchdown on 10 carries and caught a 42-yard pass. 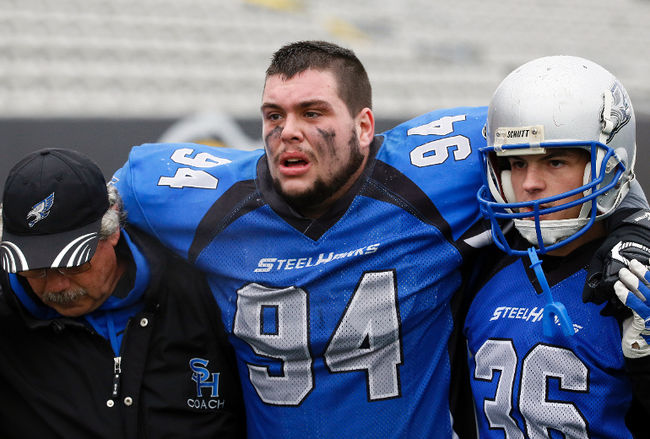 As dominant as the Superior Heights Steelhawks football team had been this season, they were on the wrong side of the scoreboard at the Simcoe Bowl Tuesday morning.

The Hawks failed to score a point against the Huron Heights Warriors, losing 48-0 to the Newmarket club at the Ontario Federation of School Athletic Associations (OFSAA) bowl game that was played at Tim Hortons Field in Hamilton.

The Steelhawks powerful running game was stymied by the Warriors formidable defence.

“It was a tough loss … They definitely pushed us around,” said Hawks quarterback Noah Griggs, who completed five of 17 passes for 84 yards, and threw three interceptions.

The Warriors dominated on the line of scrimmage, on the scoreboard and in virtually every other category. Huron Heights had 26 first downs in the game to eight by the Hawks.They rushed for 327 yards on 41 carries, compared to just 61 yards on 17 touches for the Steelhawks.

“The running game just wasn’t working,” Grigg said. The Hawks offence put up a combined total of 141 yards, while the Warriors topped out at 419 yards. “They were able to push us around for four quarters,” said head coach Seth Cond. “Basically, what we had been doing to opponents for the latter part of the season… 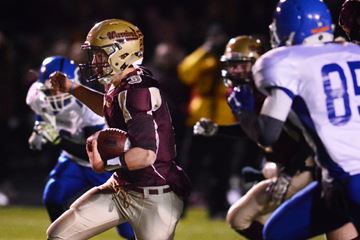 The Huron Heights Warriors entered Saturday’s YRAA football championship as the overwhelming favourite. That is not to say that their opponents, the St. Maximilian Kolbe Mustangs, were not worthy opponents; despite reaching the Tier 1 final for the first time in just a six-year tenure, the Mustangs dominated the remaining York Region competition this season, outscoring all but Huron 97 – 26 throughout fall play.
The atmosphere looked like an American football movie classic, with hundreds of fans coming out to cheer both sides under the lights of St. Max’s state-of-the-art field. Huron took first possession, using their size and strength to rumble more than 80 yards downfield, a drive eating up most of the first quarter.”

The St. Maximilian Kolbe Mustangs were playing on the notion that anything can happen in a one-game showdown.

Unfortunately, most of what happened after the first quarter was not good for the Mustangs in the York Region senior football Tier 1 championship game Saturday night. And in a matchup against a more experience and powerful opponent, almost everything has to go right to have a chance.” 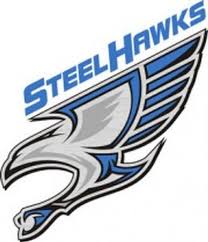 A lightning-quick start led to an early finish Saturday.
The Superior Heights Steelhawks scored just 2:06 into their Northern Ontario Secondary Schools Association (NOSSA) senior football championship game with the Widdield Wildcats.
They led 14-0 before the game was seven-minutes old and 20-0 by the end of the opening quarter.
Playing on their home field, Superior Heights wound up defeating their rivals from North Bay 48-21 to win the Poupore Cup, emblematic of Northern Ontario supremacy.” 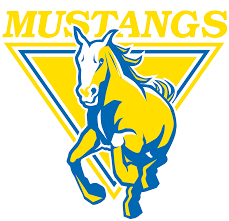 The game marks the first appearance in a regional senior Tier 1 final for the six-year-old Mustangs program, while the Warriors have reached the title game 12 straight seasons and counting.

Kickoff at St. Max is scheduled for 6 p.m.

The winner advances to the OFSAA bowl series Simcoe Bowl against the Northern Ontario champion Dec. 1 in Hamilton.

The game plan is a simple one for the Mustangs, said (coach) Gaudio.

“We have to go out and execute and if we do that and they beat us, we’ll just shake their hands and acknowledge they were the better team,” he said. “It’s 48 minutes of football and high school kids in a one-game, winner-take-all. It’s doable and anything can happen. We’re not going to change how we do things just because we’re playing one of the best teams in Canada.” 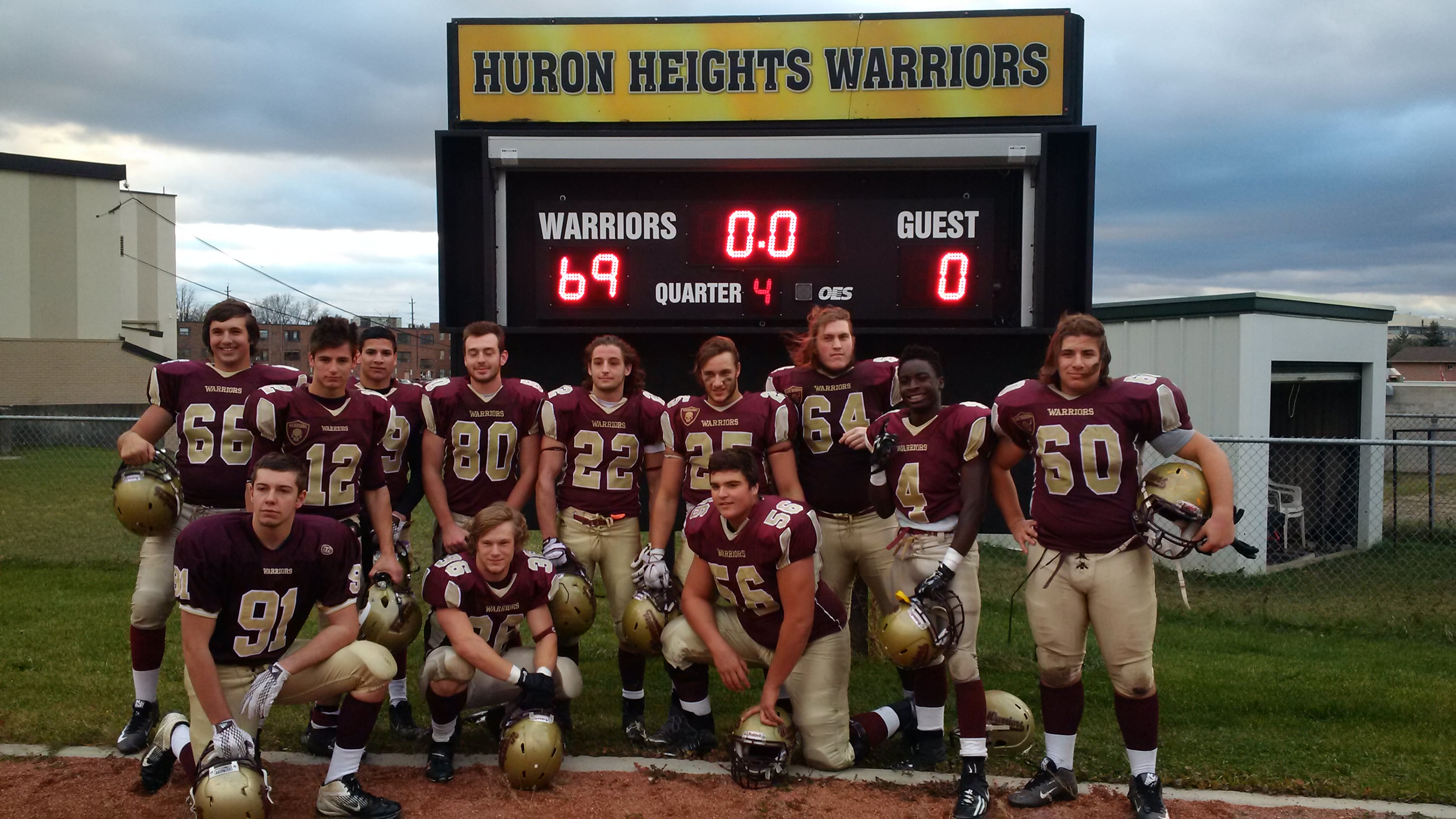 The Warriors rode a four touchdown performance from quarterback Colin Grant to a 69-0 rout of defending champion Bill Crothers Colts. It took the Warriors less than 13 minutes into the game to rack up 35 points and a 55-0 lead at halftime in stampeding the Colts.
Skyler McMurtry chipped in with two touchdowns for Huron Heights which advanced to the league final for the 12th straight season. Light Ariajegbe, on an interception return, Mike Strumos and Daniel Stefanyk also had major scores for the Warriors. 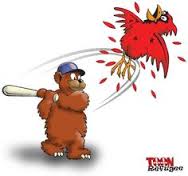 To no one’s surprise, Newmarket’s Huron Heights Warriors are a favourite for a 12th straight appearance in the York Region Athletic Association senior final. The Warriors cemented a home-field semifinal berth Monday afternoon with a 73-6 rout of Markham’s St. Brother Andre Cardinals in a game to determine top spot in Zone B. The loss knocked the Cardinals out of the four-team mix for the Tier 1 playdowns and into the Tier 2 bracket.

Warriors’ rookie Danny McWhirter returned the opening kickoff for a touchdown and returned an interception for another as the Warriors built a 52-0 halftime lead. Gregg Anderson, Skyler McMurtry and Aiden Meilzcarek also had two touchdowns for the Warriors who completed the regular season unbeaten in five games. 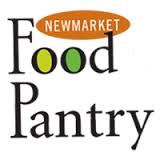 “Thank you for helping us, to help others” – Newmarket Food Pantry. 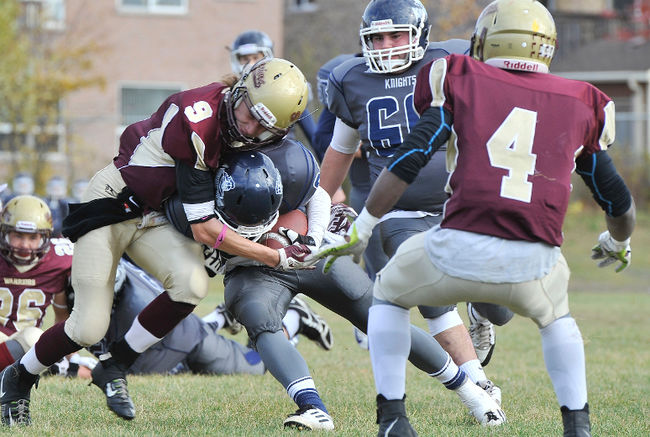 It was a rare occurrence in Simcoe County. The St. Joan of Arc Knights, who have won three straight championships, went up against another top-notch opponent in exhibition action on Thursday. It didn’t go their way.

“We didn’t expect to lose by 35, but we couldn’t get anything rolling,” said Knights head coach Nick Nicoletta. “They (Warriors) were a methodical offence that we thought we were ready for, but they execute so well. Props to their coaches and their program.” There was an expectation that the Warriors, ranked 24th in Canada, would be the toughest opponent St. Joan of Arc had to face all year. That theory was proven early on. 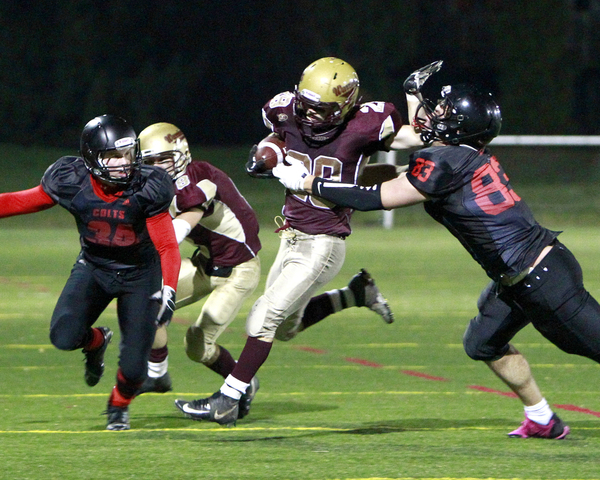 It appears no one is going to get in the way of the Huron Heights Warriors — least of all opposing defences.

The Warriors rolled to their fourth straight win in York Region Athletic Association senior/varsity football action Friday by pummeling the Bill Crothers Colts 66-0 in a rematch of the 2014 league championship game. 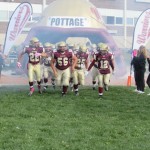 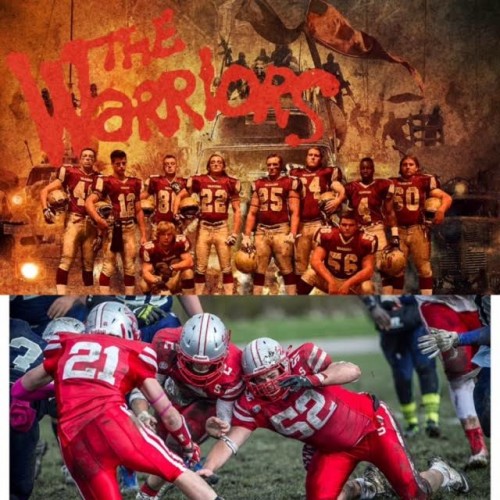 Warriors coach Heath Weir summarizes the magnitude of this match-up. “Huron Heights S.S. versus St. Andrew’s college is a heavyweight bout,” expressed Weir. “It’s Georgia Tech versus Notre Dame. If you want to be the best you have to beat the best. At Huron Heights we’ll play anyone, anytime, anywhere and were looking forward to going head-to-head with the Saints this Saturday.” 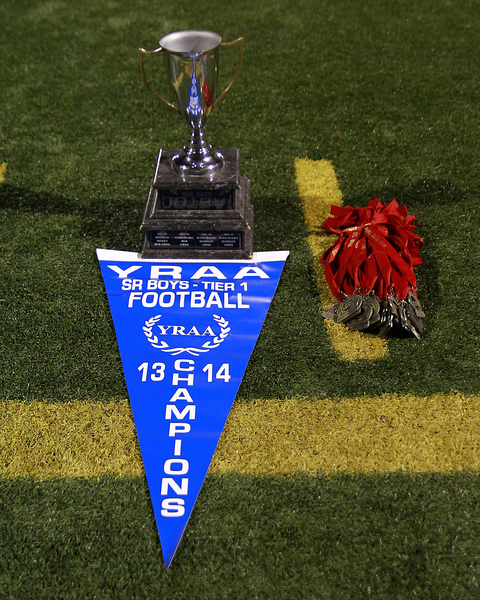 It is a tall order in a short season to beat a team three straight times.
The Huron Heights Warriors face that precise task Saturday when they line up against the Bill Crothers Colts for the York Region senior boys Tier 1 high school championship at St. Maximilian Kolbe Catholic High School in Aurora.

For two seasons the Tillsonburg Gemini have been looking for a challenge. This they got their wish and more. The uniqueness of a game like this brought college and university coaches to their field as well. The Glendale Gemini football team gave the provincial high school football champion Warriors a tough time. Brent Lale reports. 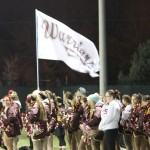 Two down and one easy win to go. 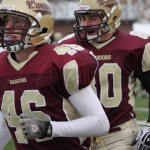 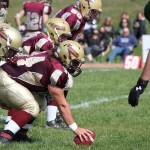 Markham’s Bill Crothers Colts came out thundering in the second half.

Newmarket’s Huron Heights Warriors, though, had enough rope to lasso a 25-18 victory Wednesday afternoon in Newmarket in a clash of unbeaten Tier 1 teams in York Region high school football… 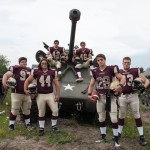 Luke Griese scored a pair of touchdowns as Newmarket’s Huron Heights Warriors opened their York Region boys senior football regular season today with a 27-0 home-field win over the King City Lions in a clash of Tier 1 rivals in Newmarket.

CFC Preview: Our goals are the make the YRAA Finals, Win the YRAA and Win a Bowl Game

One thing is certain for the Huron Heights Warriors of the York Region Athletic Association (YRAA). Their goals remain the same after 10 seasons.

“On the field, our goals are to make it to the YRAA Final, Win the YRAA and win a Bowl game,” commented Huron Heights coach Heath Weir. “off the field we want our players to lead by example in the classroom and in the community. Finally we want them to enjoy the grind! After all is said and done, football is a game and games are suppose to be fun.”

Our 5th Annual Golf Tournament held on June 7th, @ the Shawneeki  Golf Club was the most highly attended Special event ever held in the history of the Huron Heights Warriors football  organization.

Golf tickets were $130, which included a light lunch, dinner, golf cart and prizes. Dinner was only was $40. 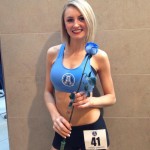 Congratulations to former Warriors’ Cheerleader Jessie  who is now an Argos Cheerleader! 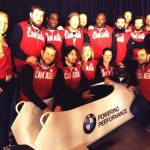 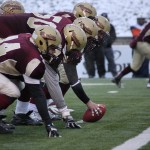 On November 28, 2013 the Huron Heights Warriors from Newmarket, Ontario defeated London’s Catholic Central Crusaders 29-9 in the OFSAA Pizza Pizza Bowl, capping off a second consecutive undefeated season for the school, as they were the defending 2012 Metro Bowl Champions as well. 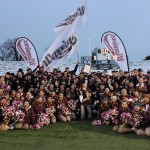 Thank you to our generous, committed coaches and the hardworking, dedicated Warriors who keep fighting to stay on top!

NewRoads GM congratulates the Huron Heights Warriors football team on their back to back OFSAA football championships!! The second coming vs Catholic Central during the Pizza Pizza Bowl at Centennial Stadium in Etobicoke. way to go Warriors!!

Check out the parade video on their Blog.