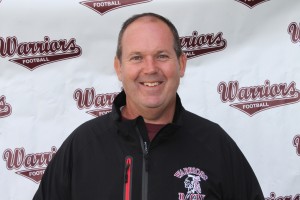 Coach Rover has been leading the Warriors since his arrival at Huron back in 2001. In addition to winning OFSAA Bowls in 2013 and 2015, He is one of only a handful of Ontario’s High School coaches who have won 2 Metro Bowls at 2 different schools (Macdonald C.I. in 1989, and Huron in 2012)

Coach Rover was a coach with the Sir John A. MacDonald “Black Scots” in Scarborough when they won the Metro Bowl in 1989. His teams appeared in 6 SSSAA finals. He also coached on 9 SSSAA All-Star teams.

Prior to coaching and teaching Coach Rover enjoyed a successful playing career as a Center and Guard at the University of Toronto 1983-1987 (OUA Champs ’83).  He played high school football at Stephen Leacock C.I. In Scarborough (SSSAA junior champs ’78, senior champs’81).